August 26. 2004 — Another Errorama has come and gone, with pleasant memories left of new friends made, old friends reunited, and new members brought into the fold.

Only four CONECA board members were able to make it this time around — James Wiles, Frank Leone, Paul Funaiole, and Mike Diamond. James and Paul manned the table like the stalwarts that they are, while Mike flitted between his club duties and the siren’s call of the bourse. Frank cruised the aisles like a hunter stalking his kill, and he apparently bagged many fine trophies.

We shared our table with Chris Pilliod, who does double duty as president of the Fly-In club. Many ace cherrypickers stopped by the CONECA table and reported that hidden treasures were few and far between. This relative lack of success appeared to be due to genuine scarcity, along with a more educated population of dealers. Still, with diligent effort, some real gems did turn up over the course of the show.

The CONECA banquet and awards ceremony was a rousing success. The food was the best in recent memory. James Essence gave a moving tribute to his mentor and business partner Len Roosmalen, who was inducted into the CONECA hall of fame. Our keynote speaker, Mike Ellis, presented a very informative talk on the early minting process. He also gave us some insights on counterfeiting techniques and how even a primitive screw press can create some very deceptive facsimiles.

The Winner’s Windfall raffle prizes were announced, although no winners were actually present. Prizes will be mailed.

Mike Diamond arrived too late to give his scheduled Thursday talk because his plane was grounded after hitting a bird. He vows never again to schedule anything on a flying day. Disappointed hobbyists need not fret, though; everything will appear in the next issue of Errorscope.

Many luminaries attended the banquet or stopped by the CONECA table, including Tim Wissert, Eric von Klinger of Coin World, Marcy Gibbel of COINage, and ANA President Gary Lewis.

We appear to have recruited quite a few new members, although I don’t have an exact count. The exhibit area included several devoted to errors. Mike Maloney presented a fantastic array of Susan B. Anthony errors, including transitional errors, experimental planchets, double denomination errors, conventional off-metals, and a great diversity of striking errors.

CONECA — the Combined Organizations of Numismatic Error Collectors of America — presented its annual awards during “Errorama”, a celebration of the error/variety hobby that was held in conjunction with the ANA World’s Fair of Money in Pittsburgh.

Friday evening, at the awards banquet, Len Roosmalen was conducted into the CONECA Hall of Fame for his decades of service to the club and to the hobby.  He is only the 5th individual to be so honored.

Paul Funaiole received the Lyndon King award, which honors the CONECA member who has gone above and beyond the call of duty in assisting the club.  Among his many contributions, Paul conducted the annual raffle (“Winner’s Windfall”) which raises money for the club and funds a scholarship program that sends a young numismatist to the ANA summer seminars. Paul also won a Kenny Knapp award for recruiting 25 new members.

The CONECA Literary awards were also handed out.  These awards recognize the most notable contribution in several categories among submissions to CONECA’s award-winning journal, Errorscope.

One hand clapping: A study of “extrusion strikes” by Mike Diamond (March/April 2004)

The John A. Wexler Award for the best article by a first time author

The Don Wallace Award for the best overall article

Gouges, dents, scrapes, and impact scars: The many faces of die damage  by Mike Diamond (Nov/Dec 2003)

Just after noon on Saturday, CONECA declared the winners of its Cherrypicker’s contest. This competition showcases the talents of club members who use their sharp eyes and nimble minds to find hidden treasures among the thousands of coins displayed in the bourse area. Charles Daughtrey came up with the best die variety, a 1956-D/S dual mintmark variety with a faint S-mintmark below and between the 1 and 9.  This BU specimen only cost Charles 50 cents.  Mike Diamond was declared the winner in the errors category.  He came up with a cent that was struck off-center by a wrecked obverse die.  Much of the die had broken off, and the remainder was so badly damaged that it left no recognizable design.  The coin was labeled “saddle struck and brockaged” (it was neither) and only cost Mike $35.

September 18. 2004—Winners Windfall Winners: The drawing for the winners listed below was held at the CONECA 21st Anniversary Banquet on Friday, Aug 20th in conjunction with Errorama and the ANA show in Pittsburgh.
George VanTrump won the 1oz Silver Eagle PCGS MS64 struck through sanding disc.
Victor Rollo won 2 defaced dies – 1993 Lincoln Cent and 1993 Washington Quarter.
Bill Woods won the 1970-D Roosevelt Dime BU DDR-001.
Floyd Bradford won the Fourth Edition of “The Error Coin Encyclopedia”
Robert Billingham won two drawings. One is the No date Jefferson Nickel, probably 1964 struck 90% off center and a 2000-P South Carolina Quarter struck 10% off center, both BU. The other is a 1930-S Lincoln cent RPM # 1 NGC MS64 RD.
Scott Salzsieder won an EF 1946 Walking Liberty Half 3X5 mm split off lamination on eagles wing.
John Lorts won a BU 1982-P Lincoln Cent broadstruck and a BU 1979-P Jefferson Nickel double struck.
Glen Despain won 3 peace Dollars. One is a MS60 1922 with a strike through on the eagles shoulder. The others are AU 1923 Dollars one with a strike through under IN of In God We and the other with a major lamination.
Neil Osina won a PCGS MS64 1978 Eisenhower Dollar uncentered broadstruck, which will be presented to a YN.
Karl Ziegler won an EF1954-S/D Jefferson Nickel.
Donald Scruggs won an AU 1954-S/D Jefferson Nickel
Congradulations to all!
Submitted by Paul Funaiole 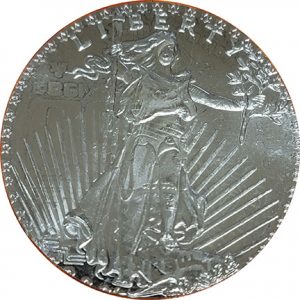